This page based on a post I made to writelog@contesting.com.

As of Windows Vista, WriteLog had two very different schemes for supporting sound boards. As of version 11.24 there is a third. The pages in this blog are (almost) all about the third and most recently released scheme. The first two remain supported for legacy setups on Vista and later where all three Mixer setup modes can be accessed, but only the first is available on XP and earlier.

1. When WL first got sound board support (in the days of Windows 3.1 circa 1993, my how time flies), boards were expensive and the best way to support SO2R was to build special splitter cables and put the two rigs on the L and R channels of a single sound board. For all Windows versions from 3.1 through XP, the Windows-supported way to route audio through the PC involved using the old Win3.1 interface to flip mixer bits and manipulate mixer L/R controls. All versions of WriteLog when installed on XP and earlier support this, but with the caveat that the drivers provided with the boards actually allow flipping all those bits. WriteLog accomplishes L/R transmit switching by sourcing a monophonic signal and using the sound board mixer controls to adjust the Stereo Balance full Left and full Right. And it supports its “Echo Mic” by making the one-and-only sound board internally route its audio from its Mic input to its Line Out. This is the mode that is documented here, and also is the only mode where the old SoundBoardCheck does anything useful. Users can even coerce WriteLog to use this mixer-flipping method on Vista and later, but when WriteLog installs on Vista and later, I purposely arranged for it to hide this old capability because it uses old compatibility interfaces that modern sound board drivers don’t reliably support. If you really have to know: go into WriteLog’s Programs folder and find and run the file WlogSbControl.exe instead of WlogSbControlW6.exe. Notice that WlogSbControl.exe is all that is installed on XP and earlier:

2. As of Windows Vista, Microsoft published the Windows Core Audio API. On Vista and later, WL no longer plays with the mixer bits and levels–you have to use the Windows controls to set the levels. WlogSbControlW6.exe is what you get in Start menu, WriteLog V11, Sound Board Mixer Control. For station microphone input, you need a separate sound board (because, using this core audio, WL doesn’t try to manipulate a sound board’s internal audio routing). WriteLog accomplishes L/R switching of transmit audio by sourcing a stereo signal that has silence on L or R, as appropriate. Echo Mic is supported inside WL by reading the mic sound board channel and writing that sound–copied to the L or R channel as appropriate and with the other silent–to the “other” channel.

3. As of WriteLog 11.24 (the most recent). WriteLog can be configured to use a separate sound board per rig. SO2R support and mic switching, then, require a total of three sound devices on your PC. WL accomplishes L/R transmit audio switching by sourcing a monophonic sound (or Left-only) on the sound board connected to the rig. 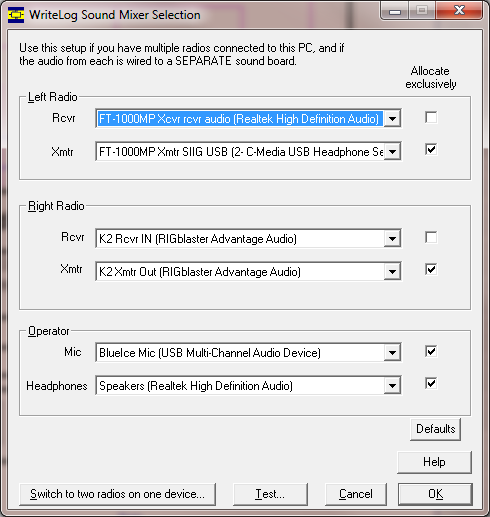