The Contest Super Simulator is a simulation package designed by Wayne, W5XD and distributed by WriteLog Contesting Software, LLC. It extends WriteLog such that the two together become a virtual contest in progress. You jump in and call CQ. Or tune around and find stations to answer.

Kari, SM0HRP, has posted a video showing the simulator in action.

It works in CW, SSB and RTTY. Setup WriteLog for one radio, and you’re running stations right away. Add a second radio to WriteLog’s configuration and you have a real time Single Operator 2 Radio (SO2R) simulation. Its usable for novices—practice your first contest QSOs before you get your feet wet—or set it up on a simple laptop to demonstrate, in real time, contesting at your local ham club. It also has:

This is also a serious training tool for serious contesting operators. Have a look at what Tom, W2SC was able to do in the 2016 ARRL DX contest from 8P5A. Here is what Tom has to say about the simulator:

Wayne did some very good work here on both the dual CQ front and the simulator front. Having used the Dual CQ now in two contests, it clearly made a big difference in my score. I believe all Single Ops will need this ability to compete at a top level. Wayne has automated a single keyboard approach that is very effective.

One challenge with this is how to practice. Out of contest, on-air practice does not simulate a contest, even from Barbados. The only option for dual CQ is a simulator. What Wayne has done is not perfectly realistic, but is very close. Setting S&P callers to 1 or 2, is very close to what is sounds like during high rate hours from 8P.

The simulator has only a few configuration options, of which the most significant is the selection of a Windows sound Playback device for it to play its (simulated) receiver audio. You’ll hear the contest startup in those headphones as soon as you call CQ. 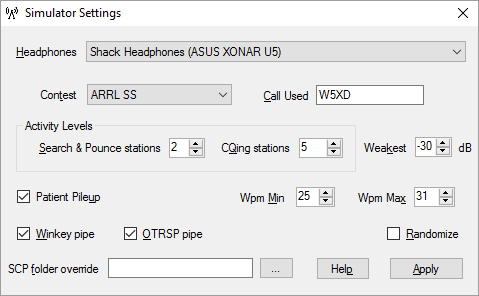 The simulator installs a Windows help file that describes in detail how to use it. You start a simulation simply by running it from its desktop icon.

Jump into the simulated contest running WriteLog. The simulator has created virtual WinKey and SO2R OTRSP (Open Two Radio Switch Protocol) devices and WriteLog talks to the simulator instead of real hardware. (Important hint for WriteLog users already set up for your real rigs: use WriteLog’s startup screen, Settings, Export to save a snapshot of your WriteLog settings before changing Setup/Ports.)

Contest Super Simulator can be set to simulate any of these four contest exchanges:

This window allows you to tweak the simulation while it is running. Set the bandwidth on its virtual receiver, adjust the sidetone volume, and set your preferred CW beat note (Contest Super Simulator adjusts the virtual receiver’s “BFO” to match.)

License
The Contest Super Simulator is freely redistributable under the MIT license.

Unzip it, and run the .msi file inside. It will give you a new icon on your Windows desktop. WriteLog’s Setup/Ports dialog has to be set for WinKey and OTRSP “pipes” (see the Contest Super Simulator help file.)

All recent WriteLog versions 11 and 12 are supported for you to call CQ in CW, including SO2R configurations.

WriteLog 12.09 (including the latest demo version!) adds support for SSB.